Where I have been?

Other sites to visit

A brand new me

A few weeks ago Murray took me over to Leading Roding in Essex to see Jason Waller and the team at Classic and Sports Cars who were the people who reconditioned my engine nearly three years ago. 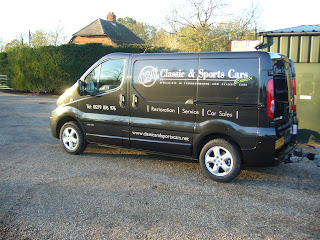 The experts there flushed my radiator and adjusted my tappets, checked and changed the timing and generally gave me the “once over”.  Just after telling Murray I was ready to be collected the observant lads noticed a water leak from the rear of my engine.  Unfortunately, there was no way to locate or, indeed, fix the leak without completely removing my engine.


So they set about that, took out my engine and installed it in a test rig, located the leak and replaced the faulty gasket then had to re-install my engine and make sure it was all just as it should be.  When they were sure all was OK the called Murray again and he came over today to collect me. 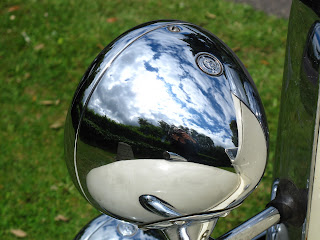 We then drove around 60 miles up to my winter hotel near Milton Keynes and Murray was extremely impressed with the way I was running after Jason and the team had worked their magic.
Trolling along the dual-lane roads at 60mph was no problem and there was not a sign of my radiator boiling and after a fairly brisk run of that length there was nothing in the radiator overflow bottle that Murray had installed back in May.
The lads at Classic and Sports Cars clearly know their stuff and Murray was very impressed with the results.
Posted by Murray at 1:07 PM 1 comment:

Murray and Christine's daughter was over in London for a visit so we all set off on a jaunt to Abingdon. Abingdon is a special place for us old MGs as it is where were were built and the Abingdon Tourist Office has produced a flyer showing the old routes that were used for test drives as each new car was completed.

These routes varied over the years but we went back to the same route that I was first driven over some 60 years previously. 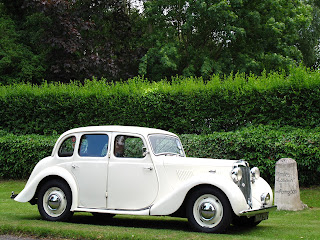 To be brutally honest, after all the miles I have covered since, over 111,000, I can't really say I remember it all that well, but it was a lovely drive through the Oxfordshire countryside all the same.
Posted by Murray at 12:01 PM No comments:

It is that time of the year again when I and all the other old gals get together with our owners and have our Spring Run.

This year it was a little further away from home base but Murray was confident we could make it there OK so early Saturday morning we set off for Ledbury, over 120 miles from home.  We set off on a route that Murray had planned along the backroads and lanes to keep us well away from the motorways and other busy roads. All was going well until about 75 miles into the journey I started my old trick of losing power and it was clear to Murray that we were not going to make the distance.

Murray made a quick call to Noel at Bewley Motors and discussed the situation and as a result had a look at the points gap.  it was clearly wildly wrong so Murray adjusted the gap and went to tighten the screw to ensure the gap did not alter again, only to discover that the screw thread was stripped.

A little lateral thinking had him swap the two screws on the points plate as one is only a fulcrum and therefore does not need to be tight whilst the other one does require being fully tightened. Fortunately the other screw thread was fine and the trick worked.

However, Murray then discovered that my hight temsion lead had fallen out of the coil. After a bit more work both issues were resolved and we were off again, making it to Ledbury without further incident and well in time for Murray & Christine to go off and enjoy their dinner with the other Y Type owners.

Early Sunday morning saw us all assembled at the start point of the run which was to end at Berrington Hall.  As the end point was even further away from London than Ledbury, Murray and Christine left the others partway through the run and we headed back to London on a gloriously warm day.

We stopped here and there for me to take a breather and for them to get some lunch and finally arrived home tired and happy after an enjoyable weekend.
Posted by Murray at 1:44 PM No comments:

One of the problems that has beset my travels is the radiator using too much water or boiling dry so Murray had lashed up a very Heath-Robinson radiator expansion tank. It was very small and not very well secured. In the May edition of the Octagon Car Club Bulletin, Alan Wakefield had written up how he fitted an expansion tank to MaTilDa, his TD.

He used a bicycle drink bottle and holder and showed where he mounted it. Murray thought that was a very clever idea so rushed out the next morning and brought one

from Halfords along with some other bits and pieces and a strip of aluminium bar to mount it on.

A couple of hours later I had a very professional looking expansion tank mounted out of the way of everything else and ready to test on the big adventure next weekend.
Posted by Murray at 11:39 AM No comments: 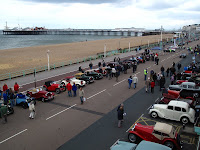 Every year, for last 27 anyway, The MG Car Club and MG Owners Club have arranged a run from the Brooklands Motor Museum in London to Brighton. In previous years this has clashed with the Y Register Spring Run so we have never made it. This year the Spring Run is later so Murray booked us on the Regency Run. 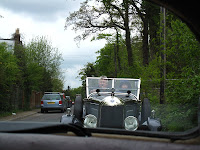 We headed down to Brooklands for the start and found, to our surprise, that we were the only Y Type among the 309 MGs that were making the run. I purred my way down along the marked route and we joined the other cars parked in a special area on the Brighton Parade along the foreshore.

After I had cooled down and Murray & Christine had enjoyed their picnic lunch we set off back to London via the byways and small villages. 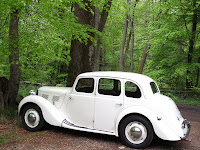 Our stop on the way back was to be White Down where Christine had been told there was a great display of Bluebells. White Down was on the London side of the North Downs and the road up from Abinger Hammer was an 18% gradient. Boy, was I glad to take a break when we got to the car park, the hill was quite a struggle. 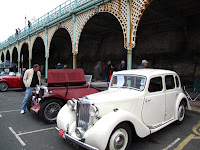 So I sat under a lovely tree and cooled down while Murray & Christine went and wandered through the Bluebells. Then it was time to head home and use my new lights as it was getting dark by the time we finally arrived. The round trip was nearly 200 miles and I performed very well.
Posted by Murray at 1:24 PM No comments: 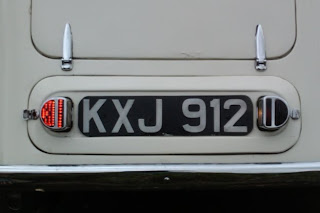 I have spent a bit of time with John and Noel getting all tuned up ready for the season and my engine is running like a top. New spark plugs, points checked, carburettor cleaned and so forth. We went for a short run last Sunday morning to check it out and I was purring along beautifully.
Over winter Murray purchased some new tail-lights for me. They are made of some new fangled gizmos called el ee dees or LEDs. They certainly were not around in my day. Here is a picture that Murray took with the job half done. (Both lights are illuminated.)
So now we will be able to go out at night and people will be able to see us clearly. The brake lights are very bright.
Murray had a few hassles fitting the first one after drilling some holes where the instructions indicated he found that the D-Lamp could not close so he had to move the mounting points back to allow the lights to clear the lens retaining springs. Then the rear of the new light fouled on the lamp body so he had to file the new light mounting board down to gently and carefully allow the lamp to close .
Posted by Murray at 11:30 AM No comments: 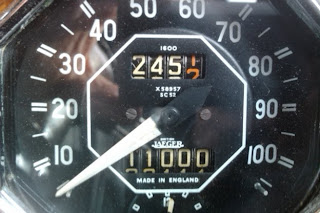 Murray came and collected me from my winter storage at the beginning of the month and was told that the oil and water had been checked.

So off we set for London and about a mile down the road there was the smell of burning oil: "Clumsy, he spilt some oil, oh well the smell will go" and on we went.

Not very much further on I was engulfed in clouds of blue smoke. Time for a hasty stop at a very convenient pull-off.

Murray was under the bonnet in quick time to see the oil filler cap not in place and oil being thrown in all directions. The problem was easily rectified and we drove on in a blue cloud as the oil burnt off.

At least the underseal has been done for this season.

A few miles later Murray noticed that the windscreen was covered in water drops but the day was fine. Another stop to firmly tighten the radiator cap which was not even hand tight.